Social Security and Retirement: Everything You Should Know

In our previous blogs we have covered the basics of Social Security, let’s move on to some Social Security and retirement strategies that can help you maximize your benefits.

When Should You Start Taking Social Security Benefits?

One of the most important decisions that you’ll have to make as a retiree is the choice about when to start taking Social Security benefits. Unfortunately, there are no easy answers, since it depends entirely on your personal financial situation.

Many Americans are forced to claim early benefits because they need the income, but if you can afford it, delaying Social Security benefits could mean collecting significantly more over the course of your life.

A good general rule of thumb is this: If either you or your spouse expects to live past the age of 80, you’re better off waiting to claim as long as possible to receive a larger benefit. If, for health or family-history reasons, you don’t expect to live that long, you may be better off claiming a smaller check sooner.

If you want to collect early, consider these points first.

Among other things, you need to consider your current health, your family history of longevity, and, if you are married, the age difference between you and your spouse.

Ultimately, it’s a very personal decision that you may want to discuss with a financial professional who can help you run the numbers and make the right decision.

Can You Change Your Mind?

If you start collecting benefits prior to full retirement age and then find yourself returning to work and having your benefits withheld, you can consider a Withdrawal of Application. This essentially allows a do-over. You need to repay the SSA everything you received to date, along with any family benefits paid on your work history, and then you can subsequently apply as if it were your first time applying. The SSA has recently restricted the use of the Withdrawal to within 12 months of collecting benefits and will only allow one withdrawal per lifetime. 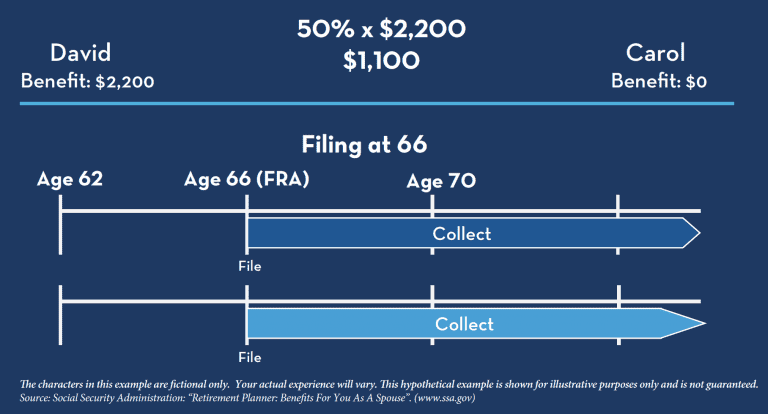 Let’s say Carol stayed home and raised the family while David worked. In this case, Carol would have benefits of $0 because she didn’t have her own working record. The calculation for this would be easy as she would be entitled to 50% of David’s benefit, and could collect spousal benefits of $1,100/month (assuming David filed at Full Retirement Age as shown in the example).1

Based on when Carol collects those benefits can impact the total she takes home. If she collects spousal benefits before Full Retirement Age (FRA), her spousal benefits will be reduced. On the other hand, she is not rewarded for waiting beyond FRA. Spousal benefits do not receive delayed retirement credits, so there is really no reason to wait beyond FRA to collect that benefit.

So how does this all work?

Now let’s add spousal benefits to the equation, it becomes a little more complicated.  It is important to note that your own benefit and spousal benefit are NOT aggregated, but rather coordinated.

Let’s take a look at David and Carol, a married couple planning out their Social Security benefits. David is the higher wage earner, and they both have an FRA of 66.

Even though they received benefits for a lesser period of time, because they received higher amounts, they actually received $580,800 back, about a $30,000 difference from collecting at age 62.

Had Carol and David waited until age 70, they would have only received $532,224. When you don’t have the longevity (David in this case only lives until age 75), waiting to age 70 may not always be in your best interest. That is why it is suggested that you consider strategies that provide the greatest amount of benefits and flexibility regardless of the span of retirement.

What if the lower earner, in this case Carol, started collecting at 62, but David had waited. Since David has not filed, Carol would only receive her own benefits (no spousal).

In the scenario shown here, Carol begins collecting her reduced benefit of $450 at 62. David decides to file for his individual benefits at age 66 ($2,200) and in turn, Carol is now eligible and begins receiving an additional $500 in spousal benefits. Because she is FRA when she begins the spousal benefits, that portion is not reduced. At the end of the day, by using the strategy shown above, David & Carol collect $584,400 from Social Security throughout their lifetime.

Now let’s add some longevity to the mix. David lives to 85 and Carol to 92. This strategy no longer provides the largest amount of benefits. The best option for David & Carol, in this case, would be to for both to begin collecting at age 70, where they would collect almost $50,000 more throughout their lifetime opposed to the strategy above. Both collecting at their FRA worked out to be slightly higher as well, however, Carol would have missed out on 4 years worth of checks.

Here is another option that can be considered when you have a couple where the spousal benefits are lower than their own. David decides to collect his benefit at his Full Retirement Age. This gives Carol the choice of collecting her own benefits of $1,400 or her spousal benefits of $1,100. If she chooses to collect her spousal benefits, she must file a restricted application, and her own benefits will continue to grow until age 70 when she can switch to her increased benefit of $1,848. As you can see, David and Carol both start collecting at age 66, but notice the difference Filing Restricted made as opposed to filing off her own record, a difference of almost $72,000.

However, this strategy does not work if Carol collects benefits before FRA, because the SSA will automatically compare the individual benefits and the spousal benefits and pay the higher. It is only when you file at FRA that you have an option to choose which benefits you want.

Also notice that if they both wait until age 70 to collect, this will maximize their Social Security throughout their lifetime ($1,156,320), about $36,000 more than the strategy shown above.

Another time to potentially switch between benefits is when a widow is entitled to survivor benefits and has a good size benefits of her own as well. In this case, Carol might compare her own benefits to her survivor and just collect the highest, but the best way to maximize her benefits would be to start collecting one and then switch to the other at age 70 so it grows 8%/ year for 4 years.

Here she is collecting survivor benefits at 60. While she received a reduced survivor benefit, she allowed her own to grow all the way up to age 70. At 70 she began collecting her own benefits of $2,904 (132% of $2,200). Using this strategy could boost her lifetime income by around $200,000! Using this strategy, she collects just over $1 million throughout her lifetime!

Whether you plan to take your benefit early, at full retirement age, or delay, be sure to consult with your financial advisor as this is a very important decision. If you would like to learn more about the specific process of How to Apply for Social Security, click here.

Joe Anderson, Alan Clopine and Pure Financial are not affiliated with or endorsed by the Social Security Administration or any other government agency. Intended for educational purposes only. Not intended as individualized advice or a guarantee that you will achieve a desired result. Before implementing any strategies discussed you should consult your tax and financial advisors.