What is an Exchange Traded Fund? Mutual Funds vs. ETFs

Amy has always believed financial planning is the best tool towards reaching financial goals. She originates from a family of engineers, which has led her work for clients being technical, logical, and detailed. As a CERTIFIED FINANCIAL PLANNER™ professional, Amy is constantly scanning tax and retirement laws and facts for her clients, to ensure no [...]

What are ETFs? An ETF is an exchange-traded fund. That’s what the acronym stands for. Now, think of an ETF like the trendier, younger version of a mutual fund. They introduced in the US in 1993. So been around a little bit, but not as long as a mutual fund. A mutual fund definitely has more history on the markets themselves.

But what an ETF does is it’s a pool where different investors can group their dollars together to buy different stocks or different bonds or whatever it is of that classification. So just like a mutual fund, you’re grouping your dollars with others to buy a range of different stocks, or bonds, or publicly traded securities.

Now within the ETF, a few things I want to break down because it’s very similar to a mutual fund but has a little bit of differences. Within the exchange-traded fund, three major things that are a little bit different than the mutual fund:

1. An ETF tends to be more tax efficient. So within a mutual fund, it’s buying, it’s selling, but it has to spit that out in the form of tax to the individual investor. An ETF and generally is not trading as much as a mutual fund, although there can always be exceptions to the rule. So then it’s not creating as much tax that’s being passed on to your return each year.

2. Within the ETF itself, it tends to be lower cost as well. Again, there can always be exceptions to the rule, but ETFs, in their characteristics tend to not have as high of fees as mutual funds.

3. Now the third element is the fact that an ETF trades on the exchange daily, so it trades just like a stock, where the price is live and you can place a trade to buy or sell during market hours. A mutual fund trades once a day at the end of the day, once the market closes. So there’s that element of being able to access cash a little bit quickly or have more control over price with an ETF.

Now if you’re asking yourself, “well, I want to learn more about mutual funds,” or “should I consider exchange-traded funds for my portfolio?” PureFinancial.com has plenty of resources where you can drill a little bit deeper so you’re making smart moves for yourself. 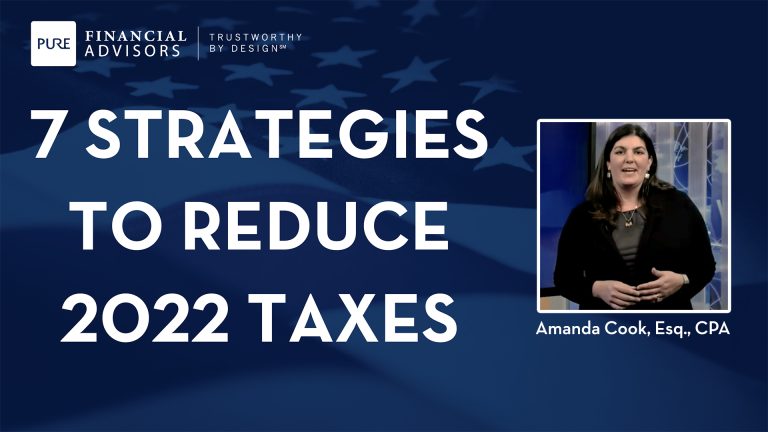 End of Year Tax Planning: 7 Strategies to Reduce Your 2022 Taxes

Learn how recent tax legislation and proposals impact you, your family, and your retirement savings, and strategies that can help you reduce your tax liability as you plan for a successful retirement. Pure Financial Advisors’ Tax Planning Manager, Amanda Cook, Esquire, CPA, and learn how to take advantage of tax-saving opportunities available to you. Outline... Giving Thanks for Retirement Classes

With Thanksgiving around the corner, it’s a reminder to show gratitude for the blessings of this past year. Have you gifted yourself with the knowledge of retirement planning? Ease your retirement woes by taking one of our retirement classes. Pure Financial’s Director of Education, Kathryn Bowie, discusses details about our classes to help you reach... Robert Gonzales, Pure Financial Tax Planner, focuses on a few key points of the changes to the 2023 tax code. FREE GUIDE | End of Year Tax Strategies Transcript Tax season is right around the corner  and I’m here to let you know about the thousands of inflation adjustments the IRS has made for the... Are you a mutual fund investor? Learn about how capital gain distributions may impact you and your taxes. Senior Financial Planner, Nathaniel Ritchison, CFP®, AIF® provides an overview of capital gains and potential strategies for mutual fund investors. FREE GUIDE | End of Year Tax Strategies Transcript The pain being felt by investors could get...