While recent market gains have been led by a handful of U.S. based large growth companies, our conviction remains firm that our portfolios are positioned to produce long-term returns with acceptable levels of risk.

Furthermore, the fact remains that U.S. stocks have only been the world’s best performers once in the past two decades. In all other years, investors solely allocated to the United States would have missed out on superior results somewhere else. This rotating market leadership (see chart below) demonstrates why we remain convinced that a global approach is best. 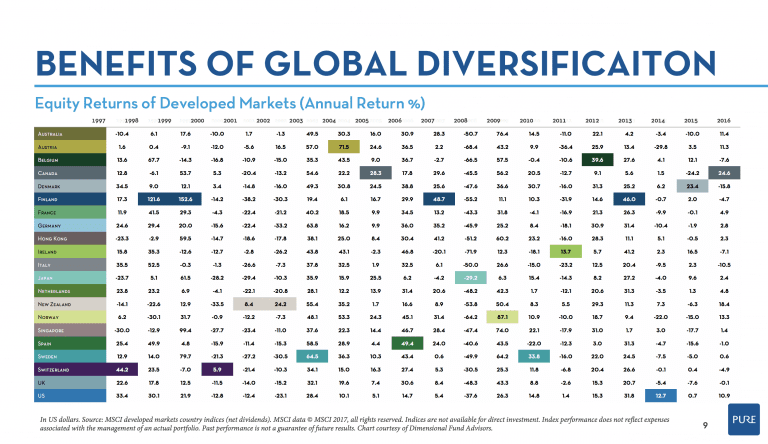 Additionally, we do not believe that centuries old, fundamental truths about capitalism and financial markets have suddenly been abolished. As such, we remain convinced that at some point in the future stocks will again enter a bear market. While we do not believe it is possible to correctly forecast precisely when that will occur, the certainty that it will happen explains why, even in the midst of a ten year plus bull market, we continue to recommend maintaining discipline around clients’ strategic asset allocation towards both stocks and bonds.

To summarize, our fundamental beliefs and investment philosophy remain unchanged, and we continue to focus on three core principles:

As investment fiduciaries, we are legally and morally obligated to do what we think is best for our clients at all times, and in the long-run we believe our approach makes sense. Nevertheless, we are also cognizant of the fact that market conditions can and do fluctuate in a cyclical manner and with that in mind, we want to take a closer look at some of the reasons why our conviction in our current positioning remains firm.

After the financial crisis, the US Federal Reserve reacted aggressively to stimulate the economy via quantitative easing and zero percent short-term rates. A famous adage in financial markets is “don’t fight the Fed” and that remains generally good advice. The statement could also be expanded to “don’t fight central banks” more broadly.

So, let’s look at where global central banks stand at this moment. On the map below, red indicates policy tightening and blue policy easing, with deeper colors representing more aggressive policies.

As can be seen, while the U.S. is well into a tightening cycle, many other countries remain in neutral or easing territory. As such, while monetary policy currently represents a headwind for U.S. stocks (albeit one that to date hasn’t really dented upward momentum), monetary policy in countries such as Germany, France, Australia, China, and Brazil represent a tailwind for markets.

As demonstrated from the chart above, the performance of the S&P 500 and international stocks has diverged sharply during the post-financial crisis period. As a result, international stocks are less expensive than the S&P, at least compared to historical averages. For example:

While relatively attractive valuations do not guarantee future returns, when combined with the fundamental benefits of global diversification, they do give us confidence in our current positioning.

Moving on to factors, small companies underperformed in Q3 2018, but have done relatively well when compared to large companies Year to Date and since the market bottom in March 2009. 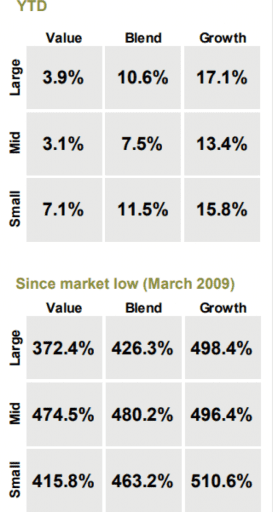 In fact, value is currently in the midst of its worst stretch of performance since the1990s. 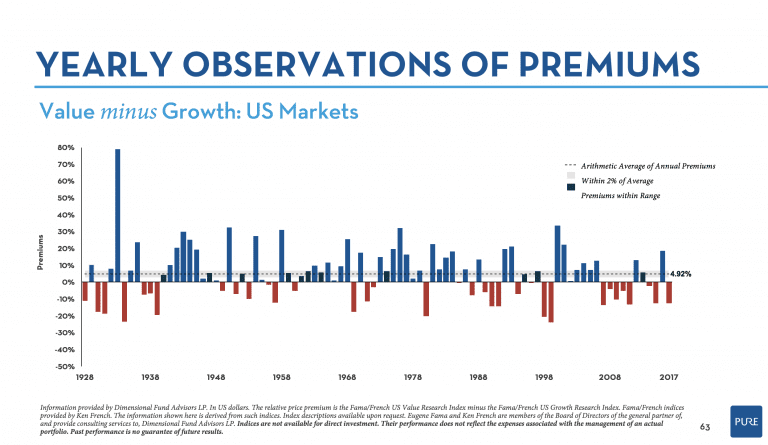 There are many possible reasons why value has underperformed including:

Regardless of why it has occurred, the recent underperformance of value only enhances our conviction in the premium. Frankly, we do not believe that nine decades of empirical data in favor of value stocks is incorrect. Additionally, there remains sound intuitive logic for why value companies should perform better.

Finally, and importantly, the success of an investment depends heavily on the price you pay for that investment. Relative to growth stocks, value stocks are currently less expensive than at any point this century, and we believe that these attractive entry points will ultimately lead to long-term returns.

An interesting observation (though certainly not a prediction) from the slide above: when the dotcom boom ended in the early 2000s, the transition from growth stock leadership to value stock leadership was swift and violent. When markets shift, as they often do, long-term return profiles can change in a hurry.

Finally, turning to bonds, there is no doubt that they are more attractive than they have been in years. That may sound like an odd statement, given the near-universal conviction that rates must go higher (when interest rates move up, bond prices decline, and vice versa.)

But in fact, bond yields have already meaningfully increased, particularly for short and intermediate maturities. As demonstrated in the chart below, the yield for a two-year Treasury has risen to nearly three percent, as compared to almost zero five years ago.

Why does that matter? Well, consider that over time; most of the return from a bond portfolio has been a result of starting yield. The higher the yield, the higher the long-term returns. As the chart below shows, there is a clearly defined relationship between starting yield and subsequent 5-year returns. In other words, higher rates are an investor’s best friends, and it is a mathematical certainty that today’s higher rates will eventually produce higher returns than would have been possible if rates had remained near zero.

In addition to generating income, bonds continue to provide portfolio diversification. However, it is important to realize that the inverse relationship of stocks and bonds, wherein a declining stock market leads to rising bond prices is a relatively new development and one that may or may not continue.

In summary, as we enter into the last quarter of 2018 our investment philosophy has not wavered, and we remain firm in our conviction that globally diversified portfolios tilted in the direction of smaller, less expensive stocks, still provides the best possibility of long-term investment success. And as we survey the economic and investment landscape, we believe that our portfolios are attractively positioned to take advantage of upcoming market cycles. So, while we do not pretend to have a crystal ball or possess the ability to time markets, our belief in price as a key determinant of investment success gives us confidence that the relatively attractive valuations found throughout much of our portfolios have left us well positioned for the road ahead.