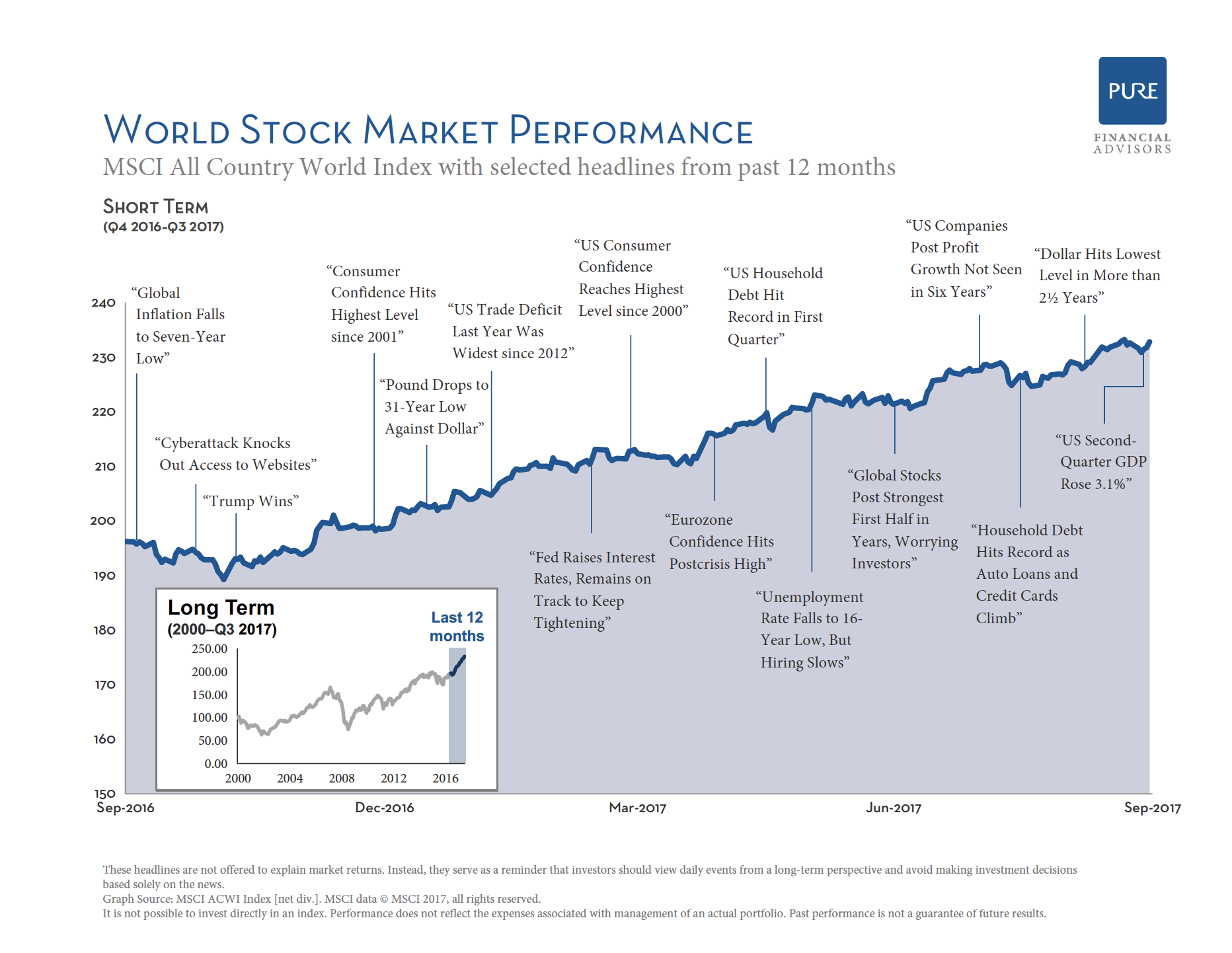 News headlines over the past twelve months have been dominated by a litany of potential disasters:

Yet, despite these looming dangers, markets have soared and investors that stayed the course have been handsomely rewarded. Going forward, North Korea remains an obvious danger zone, and the consequences of war on the Korean Peninsula would likely be dramatic in both human and financial terms. While the actions of North Korea’s leaders remain difficult to predict, I personally take some comfort that they know that any unprovoked attack on the U.S. or its interests would likely:

Given the above, I remain hopeful that the fearsome rhetoric emanating from North Korea will remain just that, and that large-scale military conflict can be avoided.

Elsewhere on the geopolitical front, several key elections in Europe, including in Germany and France, have come and gone, and mainstream parties have largely prevailed. As such, the risk of a European Union breakup has subsided, at least for now.

Domestically, the Trump Administration has so far failed to enact large parts of its proposed agenda. Attention has now turned towards comprehensive tax reform, the prospects for which remain murky at best.

A Strong Quarter for Global Markets

U.S. equities have been the star performer for much of the past eight years, but more recently international stocks have begun to catch up. In fact, in a testament to the importance of global diversification, there were 25 countries around the globe where Q3 stock market performance exceeded the 4.57% returns the U.S. provided, and indexes for both international developed and emerging market stocks as a whole outperformed domestic indices1.

Closer to home, there’s been a perception over the last several years that stock market gains have been driven primarily by a small subset of stocks i.e. the FAANGs (Facebook/Amazon/Apple/Netflix/Google). But interestingly, through September 18, the equal-weighted S&P 500 was up 8% year to date2. Since an equal-weighted index, by definition cannot be dominated by a small number of stocks, this performance points to more broad-based strength than might be expected.

Despite predictions to the contrary, yields on high-quality bonds have remained range-bound, and the long-anticipated jump higher has not occurred. Instead, longer-term bond yields have remained relatively stable, while shorter-term yields have risen. This has resulted in a flatter yield curve, which bears monitoring because historically a very flat or “inverted” yield curve has been a reasonably good predictor of recessions. So far, the yield curve isn’t flashing any warning signs, but future developments bear monitoring.

Meanwhile, yields on many lower quality fixed income instruments have been declining. The ongoing search for yield on the part of investors has driven rates on many high yield (“junk”) bonds, emerging market bonds, bank loans, and similar securities to historically low levels. This has occurred at a time when the global economy may be in the later stages of the economic cycle. As such, buyers need to exercise caution when reaching for yield to buy lower quality bonds that may be “priced to perfection,” especially since these assets are often heavily correlated with the stock market. Remember, bonds are meant to play a stabilizing role in a diversified portfolio, and they offer limited upside relative to other risky asset classes.

October’s monthly non-farm payroll report showed a surprising decline in the labor force, the first such fall in more than seven years. But on the more optimistic front, average hourly earnings showed a 2.9% increase over the past year, while the U-6 “Underemployment” rate fell to 8.3% from a year earlier reading of 9.7%5.

Due to potential hurricane-related distortions, we’ll have to see how the data plays out over the next several months, but the bottom line is that the labor force is relatively tight, as evidenced by the chart above showing the unemployment rate. And although wages have been relatively stagnant, that trend may be starting to reverse. If this is indeed the case, it might result in a long-awaited increase in the standard of living of millions of Americans who’ve found themselves left behind by recent economic gains. The flip side is that higher wages would crimp corporate profits, which have largely depended upon expense management to produce gains in an era of slow revenue growth. Higher wages could also be a prelude to higher inflation, though it is important to keep this in context, as any increase in the inflation rate would be occurring form very low levels and likely top out at still-moderate rates.

Investment Advisory and Financial Planning Services are offered through Pure Financial Advisors, Inc., a Registered Investment Advisor. The Adviser does not attempt to furnish personalized investment advice or services through this publication. Some of the information given in this publication has been produced by unaffiliated third parties and, while it is deemed reliable, the Adviser does not guarantee its accuracy and makes no warranties with respect to results to be obtained from its use.